We are thrilled to announce that we successfully completed our first pad delivery and workshop at the end of the summer! Our very own Juliet was able to attend and participate in this incredible event.

Take a look at the photo gallery to see all the highlights from the day! (Click on any photo for a gallery view.)

In preparation for delivery, volunteers helped package the menstrual kits and underwear.

The volunteers were local young men who heard about the project and wanted to support our efforts. 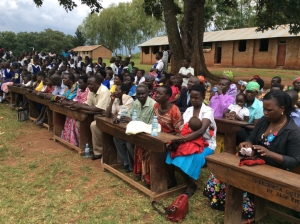 Girls and their parents gathered to participate in the workshops. 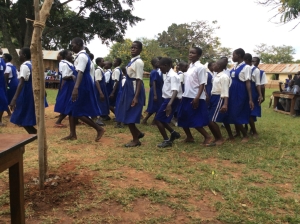 The girls recited several poems about peace in the region and sang and danced to traditional folk songs, including the Lango traditional dance.

Our incredible collaborator, chair of the Lango Development Forum, Dr. Carol Abeja gave an informational presentation. Dr. Carol’s background as a public health expert and a medical doctor allowed her to provide critical information about menstrual hygiene to the girls and their parents.

Akiya’s Headmaster, Mr. Okello Sieth, addressed the crowd, saying that he was humbled and overwhelmed that Akiya primary was a beneficiary of the Over the Moon project. He said that in 28 years of teaching, he had never seen anything like it. 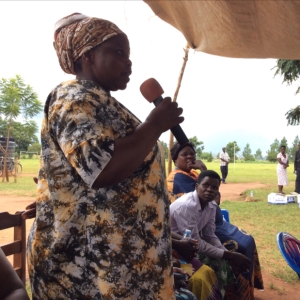 We were thrilled to have Mrs. Akello, an Akiya parent and member of the school management committee, speak as well. She thanked both parents and teachers for their commitment and emphasized the need for continued mentorship, saying that this role must not be left to the teachers alone but also to parents. 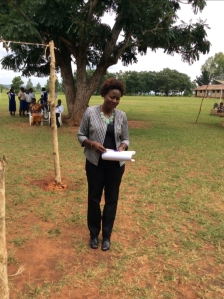 Juliet addressed the girls from a very personal perspective as a former Akiya girl! She shared with them her own journey, as someone who attended a rural school and went on to become a lawyer and a magistrate judge in Kampala.

After the workshop, a team of volunteers from Gulu University distributed 240 menstrual hygiene kits to 240 girls. Each of the girls also received a set of three panties each.

The girls were provided with information about how to use, clean, and maintain the pads.

Although most of the girls who received pads were from primary grades 5-7, a few were from primary 3-4. These were adolescents whose education had been affected by war, but they were determined to gain literacy and numerical skills.

During distribution of the kits, Juliet notice a shy girl who was being pushed away by other girls who said she was not a student there because she had dropped out in the previous term. When the senior woman teacher Ms. Harriet intervened, she identified her immediately as one of the girls who had dropped out. The girl requested for a kit so that she could return to class, and Ms. Harriet was overjoyed to have her back.

We provided additional kits, panties, and clean uniforms for the teachers to keep at school in case of emergency. The girls will always have access to a change of clothes if necessary! 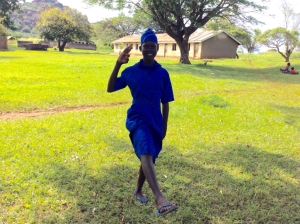 Aol, a girl guide, informed us that this year they were very excited to participate in the scouts camp for the very first time since the war ended. They finished 5th place out of 6 schools. She was very excited that next time they will be better prepared because they have panties and would be able to participate in other activities like rope climbing and many more physical sports, which many of them had previously shunned. 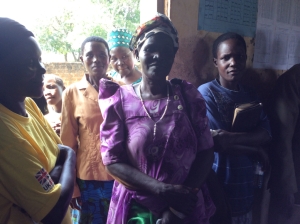 The parents and school administrators were inspired by the project to provide a changing room for the girls. 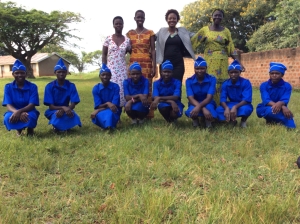 Thank you to all of our donors and volunteers who made this day possible!

We could not be happier with how the first delivery went! The participation from community members, teachers, parents, and students was overwhelming. We are so grateful to each and every person who contributed to the campaign to make this project a success.

2 thoughts on “Our First Delivery Was a Great Success, Thanks to Our Amazing Donors!”

you can help make a difference